skip to main | skip to sidebar

The Grotesque in Bacon's Paintings

A critic in a British newspaper, 1985: One day he amused me by saying, in an apologetic tone: "You know, I think I've got the scream, but I am having terrible trouble with the smile." The truth was that he could get no kicks from an image of a smiling face.

"Perhaps one day I will manage to capture an instant in all its violence and all its beauty" (Bacon).[1]


Francis Bacon's paintings are mysterious and suggestive. They are ambiguous and constitute symbols of multi-leveled significance, which is conveyed through the artist's manipulation of the grotesque.


As configurations of the ambiguous, Bacon's pictures engender both curiosity and perplexity. They often produce mixed feelings, such as attraction and repulsion at the same time. For a well-balanced yet disquieting interplay between fear and desire, vulnerability and cruelty, suffering and apathy is characteristic of Bacon's instinctive paintings.


Tension and intensity, the combination of incompatible elements, and suggestions of the monstrous or the inhuman abound in the artist's imagery.


Bacon uses the grotesque as a means of self-expression enabling him to ambiguously communicate not only his fascination with power and violence, but also his haunted condition. The grotesque thus becomes a means of simultaneous purgation and transcendence.


Aside from their extravagance, Bacon's instinctive paintings are far from being ornamental accesories (eg., Italian grotteschi and other European designs in auricular style such as Dutch Kwabornament and German Knorpelwerk). In fact, the instintive paintings are inalienable personal reports encapsulating a private truth: the artist's contradictory feelings and sensations, which are neither decorative nor entirely evasive.


Through his instinctive paintings, Bacon willingly walks along the border of an emotional precipice, suggesting his obsession with sex and death, his apathy in matters of vulnerability and suffering, and his fascination with power and aggressiveness.


The suggestiveness of Bacon's art at once reveals and conceals the artist's ultimate intentions in such a blurred way that identity itself becomes problematic in his imagery. By depicting the ambiguously combined and the equivocally suggestive Bacon disorients the viewer, who cannot establish a precise meaning in his ever-changing images. Various readings are thus possible and they seem all equally valid.


Considering that instinct implies the abolishment of morals, at the time of contemplating Bacon's paintings, we are to arrive at our own moral conclusions (certainly irrelevant to the artist and his calculated lack of concern). At this point, everything melts under our feet, because in Bacon's grotesque realm the only safe given is insecurity.


Bacon’s instinctive art, on the other hand, is certainly not the product of accident or chance, as the artist liked to claim from the mid-1960s onwards. They constitute carefully planned compositions which are inextricably related to the artist's life and also function as mysterious, anti-illustrational traps that suggest the monstrously cruel.


In this context, we realize Bacon's manipulation of the grotesque and the artist's fundamental intervention in turning it into a useful vehicle for self-expression. Bacon's instinctive images are thus profound but also problematic—a New Grand Manner of Painting merging the defiantly powerful, the disquietingly extraordinary, the suggestively monstrous, the sarcastically allusive, the theatrically manipulative, and the extremely personal.


As a species of confusion par excellence, the grotesque suspends belief and invites a search for meaning. Pushing us to consider alternative possibilities, the grotesque paralyses language and challenges categories. Grotesque art is thus thought-enlarging art.[11] This is true in Bacon's case, whose grotesque art conveys immediacy and suggests multilayered ideas granting us an active role as both spectators and interpreters. This is possibly the ultimate meaning of the artist's pictorial freedom, which he has achieved through a singular manipulation of the grotesque.


The ambiguous element that inhabits Bacon's instinctive paintings has an immense capacity to open the valves of feeling. It is this expressive, ever-changing element of Bacon's suggestive art which proves to be extraordinarily rich: pictorial freedom is a provocative, grotesque element which coherently unites Bacon's truth and our freedom.

© Mariano Akerman. All rights reserved. This article may not be reproduced or republished without the previous written consent of the author.

Impact of the article on Knol 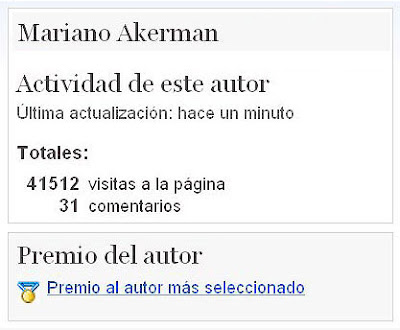 Knol prize to Mariano Akerman as a most selected author

Impact of the article on Scoop.it! 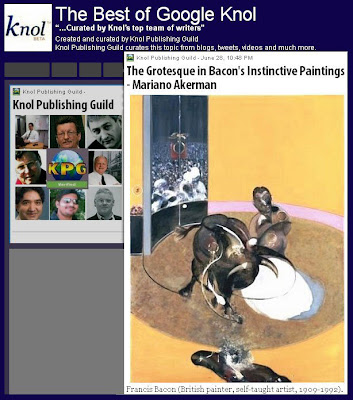 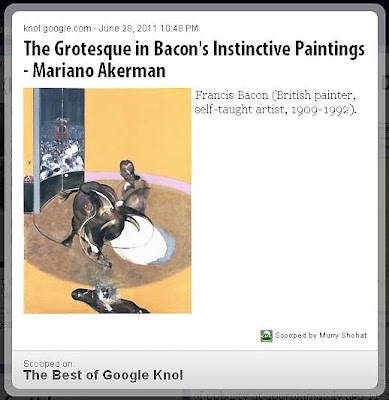 I found this text communicates the "multilayered" genius of Bacon with a startling clarity. Each word you use makes its own distinctive contribution to understanding the power of this artist. This is not common when critics waffle on about the qualities of the artists whom they analyze. You use adverb and adjective combinations extremely well: "a grand manner of painting that merges the defiantly powerful, the disquietingly extraordinary, the suggestively monstrous, the sarcastically allusive, the theatrically manipulative etc."
All artists weave personal experience as well as their passion for particular aspects of the human experience and the influence of other artists into their work.

• Enthusiastic Despair is an educational, non-profit site. Text and illustrations included in this site are used strictly for research and information purposes. Their use in any form of commercial activity or publication is covered by copyright.

akermariano
On ne voit bien qu'avec le coeur...quand il n'est pas de pierre. | Sólo se ve bien con el corazón... cuando no es de piedra. | You can see clearly only with the heart... if it's not made of stone. 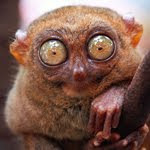 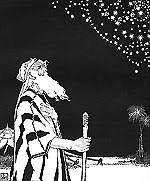